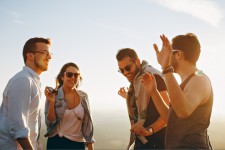 LOS ANGELES, March 26, 2018 (Newswire.com) - April Fool’s pranks are a right of passage — and they’re not just for kids anymore. Adults can get in on the fun. Plus, having a great sense of humour and the ability to laugh at oneself are important traits for a relationship — and enjoying a joke with a partner is a fun and silly bonding experience. We all know that in a strong relationship, there should be a lot of laughter.

Gifts are great, but huge gifts are ... well, they can be a challenge. Some celebrities and millionaires have had a blast gift-wrapping huge items — like an entire house — for a prank. In fact, nothing is off limits in this ongoing feud between celebrity couples Jimmy and Molly Kimmel and John Krasinski and Emily Blunt. Surprise a friend by getting a crew in and gift wrapping something larger-than-life.

For a millionaire with a little celeb status, this takes the impersonation prank up a notch. Adele pulled off the funniest prank ever by impersonating ... herself. With a little makeup magic, she entered an Adele impersonation contest and had everyone fooled.

Pretending to Lose an Engagement Ring

Sometimes, a simple prank is the best one — because they won’t even see it coming. Pretending to lose a ring or a bracelet seems so conceivable, that it can send anyone into a tailspin. And with millionaires, losing jewelry is an even scarier prospect. Just make sure to put them out of their misery ... eventually.

They might be an important and successful at work all day, but that doesn’t mean that they’re invincible. And, unless someone's made of stone, spiders and insects can spook pretty much everyone. Buy a rubber one online and place it on the wall or sink — and just wait for the squeals.

Millionaires and entrepreneurs love to prank customers with a fake product. From left-handed Whoppers from Burger King to helium-infused Coca-Cola, fake products are an April Fool’s favorite. If someone knows a millionaire to prank, April 1 is the day for a ridiculous pitch. Prank them — and then together prank the public.

Rihanna made headlines when she pranked Jimmy Kimmel, waking him up by blaring her song “B*tch Better Have My Money” and sprinkling his bed with money and confetti, but she’s not the only millionaire who would love this prank. Catch them first thing in the morning by blasting some music and turning on every light. Even better, blow confetti from the sky.

If it’s good enough for the Kardashian-Jenners ... Scott Disick pranked Kris Jenner with phone calls from a “distant relative” who was just so happy to be in touch with her. And he called again. And again. And again. Take advantage of having those restricted numbers by blocking your number and impersonating someone annoying — and don’t let them off easy.

Even the most serious and successful people can enjoy a great joke when it comes their way — and April Fools is the perfect time to prank. Anyone who wants to find someone to prank and laugh with can with MillionaireMatch, the number one millionaire dating app that has over three million millionaires looking for love. Find someone who can take a joke.